Trevor Powers has announced the release of his debut album ‘Mulberry Violence’ for August 17th via his own label, Baby Halo, and has shared a couplet of tracks. He has also announced a European tour, including a show atLondon’s Electrowerkz on October 30th.

The creeping bass-heavy “Ache” and shattering, distorted melancholy of“Plaster Saint” follow the previously released “Playwright“, with the rest of the album’s tracklist yet to be revealed.

To accompany the announcement, Powers has issued the following statement:

“Early chronicles have long enveloped mulberry trees in legend. Some say they’re the link between heaven and earth. Others say the red berries are stained from the blood of star-crossed lovers. For over 5,000 years, medicine has been made from their leaves, with some cultures claiming them to be a miracle remedy or even the key to eternal life. Although many stories and attributes surround the mulberry tree, they are known most for one reigning characteristic ::: wisdom. Mulberries wait until the danger of frost is completely gone before they begin to bud, at which point the budding occurs overnight. They are patient. They are restrained. They are calculated. They are everything we’re not.

We are tornadoes, sweeping the fields – mutable and unsettled. Storms of impulse; units of destruction. Often our instincts are misguided / lashing out rather than soaking in silence, tuning in to the whispers. Violence is king, and we are its servants ::: eager to please, trained in frenzy, and knowing little else. Since infancy, we’ve grown used to hearing words far opposite the examples we’ve been shown. We’ve been told to douse fires, but we’ve been handed a torch. Should it be a surprise that the world is burning?

Mulberry Violence is the intersection of these two dimensions. It is where stillness meets pandemonium. Dead air meets babel. Harmony meets war. Sisters from the same womb, separated at birth. It serves as a personal document of the everlasting battle inside of us. No one has it figured out; least of all me.” 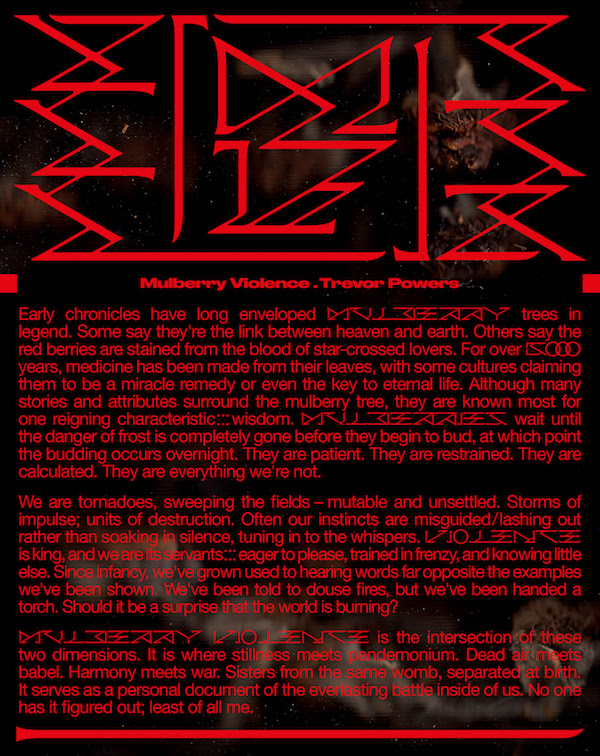 Trevor Powers (born March 18, 1989 in San Diego, CA) is an American musician, producer, and composer based in Boise, ID. He began recording music in 2011, releasing a trilogy of albums under the moniker Youth Lagoonbefore announcing the end of the project in 2015. While taking crash courses in classical theory, jazz, and ancient modes throughout the time that followed, Powers started making music experiments inspired by the visual works of artists such as Francis Bacon, Sister Gertrude Morgan, and Harry Clarke. Lining his walls in crude print-outs of pictures, he found graphic saturation helped inform the social and spiritual themes of his music.

For two years, Powers crafted his own library of sounds, grotesque and bewitching, to serve as the backbone to the poetry he had been writing while traveling between Europe, Asia, and the United States. Embracing a combination of noise, beauty, and mercurial avant-pop atmospheres, he began molding these experiments into songs highlighting the intersection of unity and chaos, nightmares, and the invisible forces at war within the human self.

Retreating to Tornillo, Texas, Powers brought his songs and a handful of contributors to Sonic Ranch, a residential studio complex in the middle of a 2,300 acre orchard, to record Mulberry Violence – the debut album under his birth name. The six-week tracking process consisted of fusing together and manipulating elements recorded over the previous two years with textures, arrangements, and programming created at the ranch. The album was mixed in Los Angeles by frequent Beyoncé collaborator Stuart White. 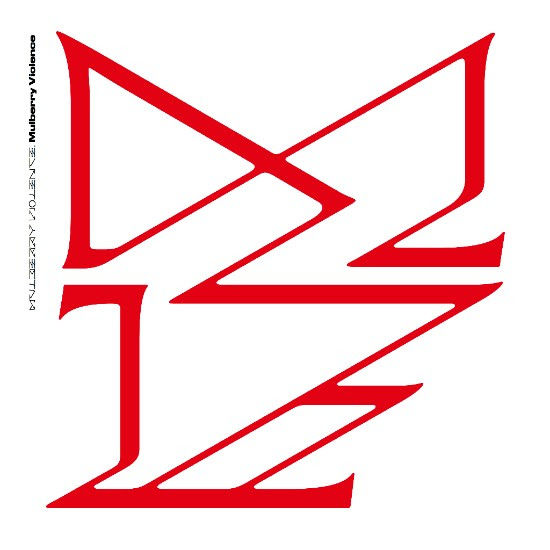 The return of a Cocoon Records artist after 7 years

Erick Morillo to play MOODS: a rare and...