Psych-rockers FLING are release debut album ‘FLING OR DIE’ via Dance to the Radiotoday. The release comes off the back of a year of sold-out hometown shows, appearances atLive at Leeds, Swn Festival, Neighbourhood Festival and singles supported by Steve Lamacq(6 Music), Huw Stephens (Radio 1), Gideon Coe (6 Music), Tom Robinson (6 Music) Radio X,Beats 1 across radio, and Wonderland, The Line of Best Fit and Clash at online press.

Describing themselves as ‘Wonky Pop’, the 5-piece from Bradford comprise of Charles McSorley(Vocals), Jack Winn (Guitar), Billy Fielding (Drums), Jake Lees (Bass) and Sam Malynowsky(Keyboards). Having met at a gig and instantly bonded over love for T. Rex and David Bowie,FLING moved out of their basement studio to bring their vibrant tunes to life with Lee Smith at Greenmount Studios (The Cribs / Pulled Apart By Horses).

The quintet explain the feelings they’re chasing with this debut long player: “This album for us, is a coming together of our collective imaginations, through themes of longing, wonder and hedonism. It feels like an audible representation of a brief moment in our lives and how we evoke the best emotions in each other. There’s an overall positive undertone to the record that definitely reflects on us as people, and it feels good to be able to share it with everyone.”

From tackling the surreal meshed with the political, as on opener Welcome To The City, a tale of putting up an extra-terrestrial refugee, to straight-up love songs replete with classical songwriting and verses sung in French (Je T’aime), there are multiple strings to FLING’s technicolour bow. Lead single Extra Special draws comparisons to Peace, Bad Sounds and Primal Scream in its laid-back effervescence, whilst any attempts to keep Just a Dog or Banjo Billy from rattling around your head for the rest of the day will be in vain. 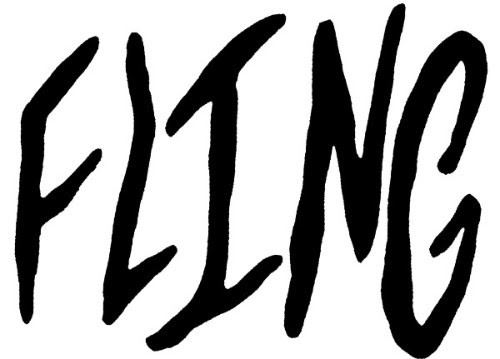 Known for their wildly eccentric live shows, the burgeoning quintet have already built up quite the following, with their playful personalities seeing them well-received on the festival circuit this past summer.

Earning plaudits from the likes of Huw Stephens (BBC Radio 1) and Steve Lamacq (BBC 6 Music) at radio, as well as The Line of Best Fit and Clash Music at press, the glam-pop outfit’s wistful ode to a mysterious love provides an alternative glimpse at their sparkling potential, with debut album FLING or Die set for release on February 22nd via Dance To The Radio.

Discussing the track, guitarist Jack Winn explains: “It’s an internal monologue of thoughts that rush through your mind when you see a person that captivates your imagination.”

Produced by Lee Smith and Jamie Lockhart at Greenmount Studios (The Cribs, Pulled Apart By Horses, Submotion Orchestra, Snarky Puppy), FLING’s Je T’Aime is out now on Dance To The Radio.