REGISTER FOR PRE SALE AND WIN!

We are proud to announce ‘A Sunny Afternoon’. A one day festival that will farewell Summer with some of Australia’s biggest and best artists at the beautiful MacCabe Park Wollongong on Sunday March 1. ‘A Sunny Afternoon’ is a festival the whole family can enjoy with children and family priced tickets plus bambinos under 4 free!

Register for pre sale here and have your chance at winning a meet and greet with Missy Higgins + 4 x VIP Tickets OR Family Package! 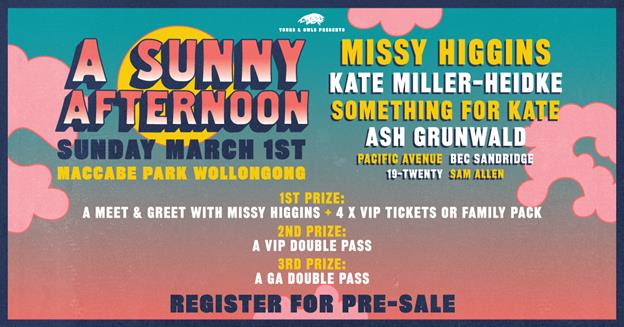 “And I love to live so pleasantly….Live this life of luxury….Lazing on a sunny afternoon…… In the summertime”

Multi-platinum selling, ARIA Award winning singer-songwriter Missy Higgins heads the lineup of ‘A Sunny Afternoon’. With 5 highly acclaimed studio albums, Missy has amassed an incredible cannon of hits. ‘Scar’, ‘Ten Days’, ‘Steer’, ‘The Special Two’, ‘Where I Stood’ and ‘Futon Couch’ from her latest studio album ‘Solastalgia’, the list goes on. Missy Higgins live is an incredible experience. You will laugh, you may cry, you’ll certainly dance and singalong.

Kate Miller-Heidke is an award-winning singer-songwriter who traverses the worlds of indie-pop, folk and opera. She is the only artist in history to perform at the New York Metropolitan Opera, the Eurovision Song Contest, and Coachella. From the multi-platinum ‘Last Day On Earth’, the award winning ‘Caught In The Crowd’ to the song that wowed Eurovision 2019 ‘Zero Gravity’, Kate Miller-Heidke’s live show is one not to be missed.

‘A Sunny Afternoon’ could not be more excited to have one of Australia’s most enduring and influential rock bands, Something For Kate on it’s lineup. Celebrating 25 years as a band, SFK cut across generations with their music continually pushing boundaries. With songs like ‘Captain (Million Miles an Hour)’ ‘Electricity’, ‘Hallways’, ‘Monster’, ‘Déjà Vu’ and ‘Survival Expert’, Something For Kate has been the soundtrack to many peoples lives. And with the exciting news of new music on the way, that soundtrack will continue in 2020.

Ash Grunwald is one of Australia’s finest blues guitarists. His nine studio albums have taken him around the world and back again. His latest album ‘Mojo’ features an incredible list of guests including Kasey Chambers, The Teskey Brothers and Joe Bonamassa and has been nominated for Best Blues Release at the 2019 ARIA Awards. Blues on ‘A Sunny Afternoon’ never sounded so good.

‘A Sunny Afternoon’ wouldn’t be complete without some of the most exciting artists to be making music who have a connection to The Gong and Illawarra region.

Pacific Avenue have just released their debut EP ‘Strawberry Skies’. This 4 piece indie rock band from Kiama have been embraced by triple j Unearthed and have quickly become one of the hottest new bands right now.

Bec Sandridge is one of Australia’s most exciting indie pop artists. Fresh from the release of her debut album ‘TRY + SAVE ME’ in October, Bec is pushing the pop rock boundaries as an artist and picking up hordes of fans along the way.

19-Twenty have been dubbed “The future of Blue & Roots in Australia” by the ABC. They are electric. An infectious riff and groove based blue-billy-grass-rockin’-roots band that have been wowing audiences throughout Australia and Europe.

Influenced by the likes of Matt Corby and Jeff Buckley, Wollongong local Sam Allen is an indie rock artist who current single ‘Heirloom’ is getting lots of love on triple j Unearthed. Sam rounds out a crop of artists that have having incredible success nationally and will bring plenty of home town feels to ‘A Sunny Afternoon’.

“Now I’m sitting here….Sipping at my ice cold beer….Lazing on a sunny afternoon…..In the summertime”

GET UR GROOVE ON MELBOURNE