Opened in May 2018, Beyond Perception: Seeing the Unseen is a ground-breaking exhibition, aimed at young adults. It was developed in collaboration with an advisory board of young people engaged with STEM subjects, and a selection of researchers and engineers from Victoria’s top research institutions. It continues the exciting  process of redevelopment occurring across Scienceworks and Museums Victoria that seeks to re-imagine the museum experience for all ages.

Pillow Pro make lux lounge beats for the bedroom. Smooth and seductive, their mesmerising intertwining of vocal melodies is the perfect sonic accompaniment to the dreamy, out-of-this-world themes of Beyond Perception. They will fill the Scienceworks with blissful sounds as you journey through the unseen science revealed through Beyond Perception’s six spaces. Listen to Pillow Pro’s ‘Sex Appeal‘ single, and soak up their slow-jam sounds.

Led by multi-talented producer and multi-instrumentalist Carla Ori, Biscotti plays live as a four-piece band. They deploy sound expertly, forging cinematic, otherworldly landscapes. Elements of synth pop, disco, hip-hop and funk come together, resulting in Biscotti’s colourful avant-pop. The video for their most recent single ‘Fantastico’ is a technicolor dream.

Future Fosil is a one-woman act, visiting Melbourne all the way from Chile. Expect delicate, ambient, transportative electronic sounds that are forged with heart. Future Fosil will ease audiences into their evening with a reverb drenched, beat-heavy set, sure to lovingly set the scene.

Guests will delve into the dark and atmospheric Beyond Perception galleries, which feature stunning light projections, and extensive immersive and interactive elements. These large-scale exhibits reveal the invisible fields and forces that surround us, addressing gravitational waves, invisible light, turbulence, sound, and the electromagnetic spectrum. The night will also feature short talks from some of the researchers, engineers, designers and artists who brought Beyond Perception to life.

One particularly fascinating feature of Beyond Perception is the custom-built generative soundscape. It uses high-tech software to manipulate all of the ambient sound produced at Scienceworks into a cohesive soundtrack that is never the same twice. At Party Beyond, visitors will be able to experience this soundscape after its sonic output has been affected by the sound of the artists playing live downstairs. Punters can then continue contemplating the future by exploring the future-focused Think Ahead gallery.

Party Beyond is a unique opportunity for adults to mix and mingle after-hours in this 3.7 million dollar gallery redevelopment at one of Victoria’s premier museums. Shelter from the winter winds out west and gain insight into the incredible forces that shape our world. 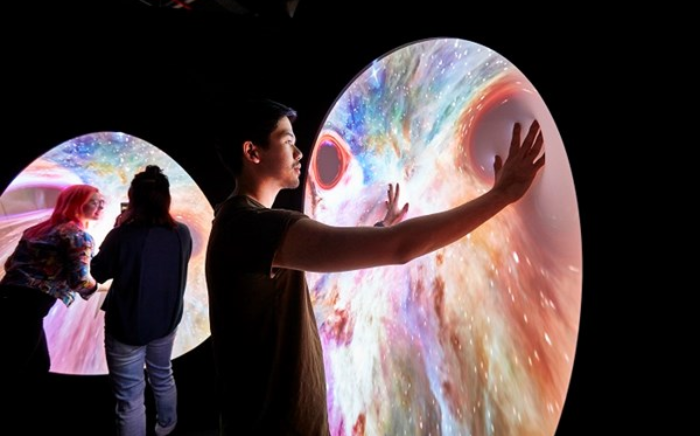 ANGUS & JULIA STONE SHARE GORGEOUS NEW VIDEO FOR “NOTHING ELSE”