AT THE GORGE AMPHITHEATRE 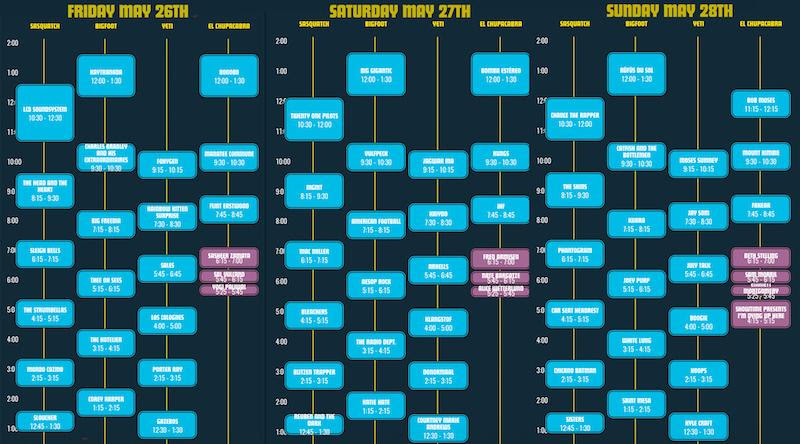 (downloadable version HERE and viewable HERE)
Sasquatch! 3-day and single day tickets are available for purchase at Sasquatchfestival.com
Created in 2002 by Pacific Northwest native Adam Zacks,  Sasquatch! established its legacy through thoughtfully curated programming featuring global and regional artists that appeal to its diverse audience. The unique backdrop and fresh take on the traditional festival draws an annual pilgrimage from nearby and afar. Now in its 16th year, the festival has a rock solid roster of past performers:Arcade Fire, Beastie Boys, Beck, Bjork, The Black Keys, Coldplay, Foo Fighters, Jack White, Kanye West, Kendrick Lamar, Mumford & Sons, Outkast, R.E.M., plus top comedians: Zach Galifianakis, Flight of the Conchords, Sarah Silverman, Nick Offerman, and Maya Rudolph.
“Sasquatch is still the strongest rock and pop festival on the West Coast.” –The New York Times
“Sasquatch! is America’s most epic music festival at America’s most epic concert venue.”-MTV
“Sasquatch! remains a kind of far-off indie rock utopia.”-Wired
“One of the most well-planned and organized music festivals in the U.S.” –Pitchfork
“It’s hard to imagine a superior festival setting than the Gorge Amphitheater, where festival-goers hear their favorite bands…echo into the valley of the Columbia River and its sprawling foothills.”-Stereogum
“The Gorge Amphitheater is one of the country’s most scenic treasures, and the annual Sasquatch! Music Festival delivered on its promise of sonic and visual stimulation.” –Vibe
www.sasquatchfestival.com
SASQUATCH! MUSIC FESTIVAL
0 comment
0
Facebook Twitter Google + Pinterest

Principal – Go To The Principal OUT NOW...