In celebration of the success of their debut album YOUNG, Overcoats will release a deluxe version of the album with new music and this excellent new version of “Kai’s Song“. The duo tells us “Kai’s Song” is “one of our favorites from the album. It’s a song about self-love and acceptance – treating yourself with kindness even when you don’t recognize the person staring back at you in the mirror. Whether you’re having an off-week or month or lots of change is happening around you, you can always come back to yourself. We wanted to record a version of the song in its most vulnerable form.”
Overcoats just wrapped a run of US dates and will be back on the road again next week bringing their captivating live show to more audiences around the country. All dates are listed below.
Tour Dates:
11/3/17 – New York, NY @ Bowery Ballroom^
11/10/17 – Washington, DC @ Rock & Roll Hotel*
11/11/17 – Richmond, VA @ Strange Matter*
11/12/17 – Carrboro, NC @ Cat’s Cradle*
11/14/17 – Columbus, OH @ Rumba Cafe*
11/16/17 – Grinnell, IA @ Grinnell College
11/17/17 – Chicago, IL @ Lincoln Hall
11/18/17 – Oberlin, OH @ Oberlin College
12/7/17 – Seattle, WA @ The Crocodile
12/8/17 – Los Angeles, CA @ Troubadour 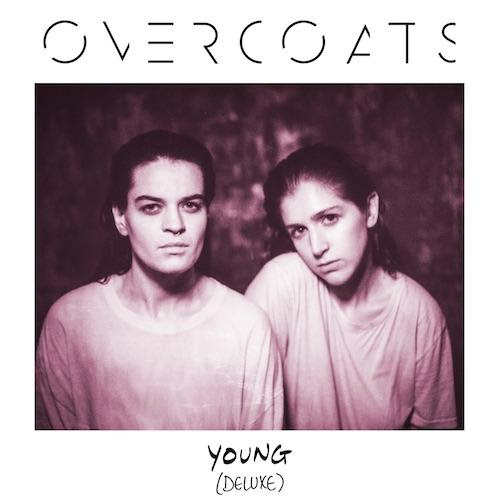 YOUNG
Deluxe Tracklisting
1. Father
2. Smaller Than My Mother
3. 23
4. Leave The Light On
5. Hold Me Close
6. The Fog
7. Walk On
8. Little Memory
9. Siren
10. Nighttime Hunger
11. Kai’s Song
12. Mother
13. Kai’s Song (Acoustic) (Bonus Track)
14. I Don’t Believe In Us (Bonus Track)
Click Here To Listen To “Leave The Light On”
Watch Overcoats On Tiny Desk
Watch Overcoats Perform On World Cafe
Press Acclaim for YOUNG:
“The chills they give me; the fact that I can’t look away when they perform; their complex and irresistible harmonies; the vulnerability to their words and the dance-y beats they put behind them.” – Bob Boilen of NPR
“…one of the best albums of 2017 …” – NPR
“Overcoats harmonize constantly and consonantly in the style of old-line country brother acts, from the Stanley Brothers to the Everly Brothers.” – New York Times
“YOUNG might be one of the coziest albums you’ll hear all year – but it still packs enough oomph to ignite a late-night dance party…” – Entertainment Weekly
“The pair consistently brings together tight vocal harmonies with upbeat electronic tracks for a fresh take on folk…” – NYLON
“…Overcoats transforms these moments of vulnerability into a celebration of finding…strength, bit by bit.” – Noisey
“With electronic production as their backdrop, Overcoats shine with their vocal harmonies and timeless songwriting, creating an intriguing blend of modern and classic styles.” – Pigeons & Planes
More on YOUNG….
On their first single “Hold Me Close,” Hana and JJ’s melodies are purity in unison, providing two distinct but entwined perspectives on the complexity of love. In their words, the song is about finding solace in the present when the future and past seem impossible to understand. It’s about loneliness and disillusionment that we can feel in relationships, and how we must persevere anyway in hopes of finding the beauty in love. Elion and Mitchell were drawn to each other when they first met in 2011, finding connection in their diverse love of music and an immediate closeness that verges on sisterhood. Their meeting was transformative emotionally as well as creatively. Both halves of Overcoats describe the first time hearing each other sing as an epiphany: the harmony of their voices leading to personal, individual discovery. This bond forms the foundation of Overcoats, and it fills the ecosystem of
YOUNG with its stunning sound and sentiment. Album opener Father unfurls in clouds of three-dimensional sound: a cathedral of echo over waves of delay and the din of incidental noise. There is a rare resonance in Overcoats evident from these opening tones: between their separate (but inseparable) voices, flawlessly intuitive performance, and sublime musical production. Their harmonies slide from brassy to silken with elegant ease, floating over muted rhythms wrapped in lush swells of synthesizers.
YOUNG was written by Overcoats and co-produced by Nicolas Vernhes (Daughter, The War On Drugs, Dirty Projectors, Cass McCombs) and experimental R&B artist Autre Ne Veut, with additional production from Myles Avery and mixing by Ben Baptie (Lapsley, Lianne La Havas, Lady Gaga, Mark Ronson).  Their palette is stealth and simple electronics, with traces of folk, pop, and bluegrass embedded within. Like a spectrum from Sylvan Esso to Simon & Garfunkel, Overcoats creates music deeply rooted in emotion, and guided by the search for its innate expression through voice and electronics. Songs that began as bedroom creations flourished into rich but restrained productions, with careful craft illuminating the nuance of Overcoats’ unique songwriting.
On YOUNG, Overcoats creates music of mutual empowerment, at once synthetic andorganic, wistful and uplifting, triumphant and subdued. The Fog is a bay of lonesome, oscillating synth chords: its boundaries defined by the reflection of echoic finger snaps. Elion and Mitchell find clarity through a lovers’haze, their stoic verses liberated by resounding chorus: Freedom is when I’m without you / When the fog lifts I’m the only one I see. Leave The Light On layers looped and transposed vocals over thumping two-step 808 and punctuations of club-ready brass. Showing the true breadth of influence, songs like Little Memory and Smaller Than My Mother are laced with gospel and jazz, strands woven in with Vernhes’ and Autre Ne Veut’s natural touch.
YOUNG has a clear, vertical ambience that lets the topical vibration of the music shine through. This is the arrival of a magical collaboration: a rare unification of two hearts under one imagination. Elion and Mitchell are bound by absolute belief in one another, and the confidence that every creation is compelled by shared purpose.  Like its arc of transformation, from Father to album closer Mother, Overcoats captures the notion that we are the intersections of our parents’ greatest fantasies and biggest follies.
YOUNG is a startlingly wise portrayal of these complexities: of love, on inspiration, and the legacy of family.
Official / Soundcloud / Facebook / Twitter / YouTube / Instagram
Overcoats
0 comment
0
Facebook Twitter Google + Pinterest

Art With Me in Tulum announces Bedouin, Michael...