Following the release of her debut EP We Used To Have Real Conversations, Nat Vazer is sharing the clip for new single “Privilege”. Filmed earlier in the year when Nat was living in Toronto, day one shooting was a sunny 27 degrees. Day two a snow storm hit – “I was trapped in a basement apartment. What can you do with white walls? A lot apparently!”

The track looks at white privilege, and recognition of that. Vazer was watching a show “Dear White People” when writing the lyrics, which discusses racial bias and discrimination. The term “woke” is used a lot.
“I wanted to write a song that kind of captures that state of being oblivious or half-asleep to those issues, and then waking up to them and seeing them everywhere… In the breakdown section of the song I say ‘hey hey’ a few times – trying to paint this picture of waking someone up from a dreamy state or that auto-pilot state of mind”.

Vazer was also reading Kurt Cobain’s diaries at the time and resonated with his entry “the Afro American invented Rock and Roll yet has only been rewarded or awarded for their accomplishments when conforming to the white man’s standards”.
Though not a Nirvana die-hard, for “Privilege” Vazer was hoping the grungy genre would also “lend itself to that stoner, half-asleep / half-awake feeling.”

Nat Vazer will be supporting Lime Cordiale on the Victorian leg of their epic “Dirt Cheap” tour through November and December.

NAT VAZER
WE USED TO HAVE REAL CONVERSATIONS EP 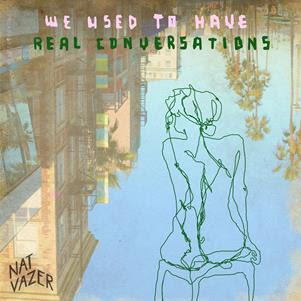 1. Keep Away From Parks
2. You’re Winning Me Over
3. Restless
4. Privilege
5. Struggletown
6. Summer Holiday

Stream It Here
Buy It Here

“This Australian singer-songwriter’s haunting voice and uncanny ear for Beach Boys melodies is just what the doctor ordered.” – Get Some Magazine

“Count to thirty and that’s about how long it will take for you to fall head over heels for Nat Vazer.” – The Revue

“If you don’t know newcomer Nat Vazer, brace yourself because her latest single will charm the pants off of you ” – ToneDeaf