EP OUT THIS SUMMER
Louisiana band GIVERS return with their new single ‘Collide’, out now via Glassnote Records. Produced by Grammy Award-winners Dave Cobb (Chris Stapleton, Sturgill Simpson) along with engineer / producer Eric Heigle (Arcade Fire, Lost Bayou Ramblers), the song sees the band channeling Afro-pop polyrhythms and art rock collage into raw, transcendent joy.
GIVERS’ Taylor Guarisco & Tiffany Lamson said of the song, “’Collide’ is what you get when you have a band from Lafayette, Louisiana who grows up loving the guitarmony world of The Allman Brothers, then relocates to New Orleans to be closer to the back beat of The Neville Brothers. Mix in a few trips to Nashville to work with producer Dave Cobb at RCA studio A plus a healthy dose of getting weird with producer Eric Heigle back in New Orleans–you’ll then begin to arrive at the full scope of ‘Collide’.”

The video was co-directed by GIVERS and Emma Kanter, and was shot in New Orleans. Taylor Guarisco said, “With this ‘Collide’ video we sought to make something that was both beautiful and totally ridiculous. And without giving away too much, I can say that no band members or wiener dogs were hurt in the making of it.” 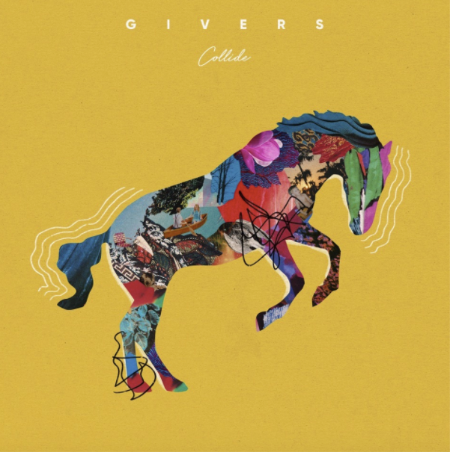 GIVERS will kick off an extensive US tour this Friday with a hometown performance at New Orleans Jazz Festival, followed by a run of East Coast tour dates. A full list of dates can be found here.

Since breakout 2011 release In Light, GIVERS have embraced a vision of life and love that, in the band’s early years, bubbled with the optimism of unchallenged youth. Formed in 2008 in the sweaty dancehalls of Lafayette, Louisiana, GIVERS knew right away that they had something special. Crafted from the improvisational and dance-fuelled atmosphere of the area’s zydeco, Cajun, and jazz cultures mixed with an affection for new wave, funk, and world music, the infectious results brought a quick rise to the spotlight for the young band.

From the start, the band achieved dizzying success. GIVERS toured world class stages, both international and domestic, becoming a fixture on the major festival circuit, including Bonnaroo and Lollapalooza, and winning appearances on Late Night with Jimmy Fallonand Jimmy Kimmel Live! The band’s electricity even struck Neil Young, who caughtGIVERS on Late Night and mused about it, in a stream of consciousness, in his autobiography.

Now each in their early 30s — ragged, accomplished, philosophised — the band’s creative nucleus of Taylor Guarisco, Tif Lamson, and Josh LeBlanc has transitioned from celebrating life to probing its complications: the cruel fiction of unmet expectations, the deflation in opportunities lost and the elation in new ones found. In the process, they left the place of the band’s birth (Lafayette, La.) for the cultural kaleidoscope of New Orleans, now the site of their coming of age.

ABOVE & BEYOND HIT AUSTRALIA IN 5 WEEKS & ANNOUNCE INTERNATIONAL SUPPORT ACTS

How to Plan a Wedding When you’re from...