My name is Oscar, I play the guitar in the band.

The band had a slow build. Tim was living in Stockholm, I in Berlin – he was working on a solo album, and by a series of serendipitous steps, I ended up working with him on some rough recordings that formed the basis of that album (as demos). We both – separately – went back to Australia, and he embarked on tracking the record in his then-home, Brisbane, with producer Matt Redlich. I went up and did some tracking on the record, and before we knew it (long story short), it started sounding like a band. And so, Tim felt it should be a band. Not a solo project. So, he named it HOLY HOLY, I came on board, and there you have it. Ryan Strathie, drummer, played on most of those early sessions and is indispensable to the sound; now, Graham Ritchie (bass) is also indispensable.

All over the joint. I’m in Melbourne, along with Matt Redlich. He moved down here from Brisbane. Tim has moved to Tasmania, and so has Ryan. Graham, bass player, remains in Brisbane. We don’t rehearse very often…

Lately, we’ve been writing increasingly together. In the room. Sometimes we flesh out a basic idea for a song – based around some chords, or a melody, or a drum beat, and then we go away and finesse it later. Often then we’ll develop basic demos of the song and send them around – Ryan might put some further drums on the demo, and Tim some vocals, and so on.

All sorts of things. I try to divide my time between lots of projects, so I don’t get bored and lose myself down a rabbit-hole. Doing some rehearsal for our upcoming tour, a couple of other things that I have to keep secret right now…

Guitar wise… I use a Maton electric. BB1200. It’s great. Versatile. And quite loud. Can be warm, and can bite. I also use lots of pedals and a couple of amps on stage. My pedal board is frankly obscene. I’m a little embarrassed by it. Yes. I don’t think it’s absolutely necessary, mind you. Each to their own.

I want to build my own music studio. With luck, I’ll do this with Matt and my wife Ali. Have our own happy place.

Started playing guitar as a youngster, after being solidly obsessed with Queen, Led Zep, Cream, Hendrix (all that stuff) as a child. My folks probably assumed I’d put it down after 6 months. I didn’t. With HOLY HOLY – our tour starts in Thirroul, NSW, on June 22.

“Brilliantly adventurous… A testament to the songwriting prowess of Dawson & Carroll… One of the country’s best bands.”
– ROLLING STONE ★ ★ ★ ★

“’Paint’ remains constant in its intelligent construction and emotional resonance. It’s a delightful listen and an exciting new chapter in the career of this impressive Aussie band.”
– THE AUSTRALIAN ★ ★ ★ ★ ½

Following the announcement of the PAINT national tour, Holy Holy today share an impressive line up of special guests to accompany them on the road this June and July.  The Money War will bring their trademark dream pop to the main support.  The Perth two-piece received a coveted five star review from Richard Kingsmill, a WAM nomination for Best Rock Song for Recall and were selected as the triple j unearthed winner to perform at Southbound. Renowned for his special blend of electronica and folk, Brisbane’s Machine Age(Adrian Mauro) will round out support duties with his unique one man show.

Lauded for their live prowess, in the past 12 months, Holy Holy has captivated sold-out audiences across Australia, to London and The Netherlands continuing to prove themselves as one of Australia’s most important new voices. Following the  release of their critically acclaimed second album PAINT, arriving at #7 on the ARIA album chart, they will perform nationally this June and July with a series of capital city and regional dates.

The long distance union of award winning singer-songwriter Timothy Carroll (Launceston) and guitarist/composer Oscar Dawson (Melbourne), along with band mates Ryan Strathie, Matt Redlich and Graham Ritchie, saw Holy Holy release PAINT, their sophomore album in February 2017. A panoramic record with songs bursting with ideas, it is a testament to a band who’ve leapfrogged the difficult second album syndrome and delivered the experimental fifth album already – all without losing any of their personality.

Since the release of their ARIA #11 debut album, When The Storms Would Come, the APRA PDA Award Winning, Vanda and Young Songwriting Competition finalists have toured through the UK and Europe three times including festival performances at Primavera, The Great Escape, Reeperbahn, Dot to Dot, Liverpool Music Week and London Calling.  Locally, they’ve embarked on numerous sold out headline tours, performed as special guests for Boy and Bear at the Sydney Opera House, Vance Joy and The Preatures and taken coveted spots at Splendour in the Grass, Falls and headlined BIGSOUND festival. 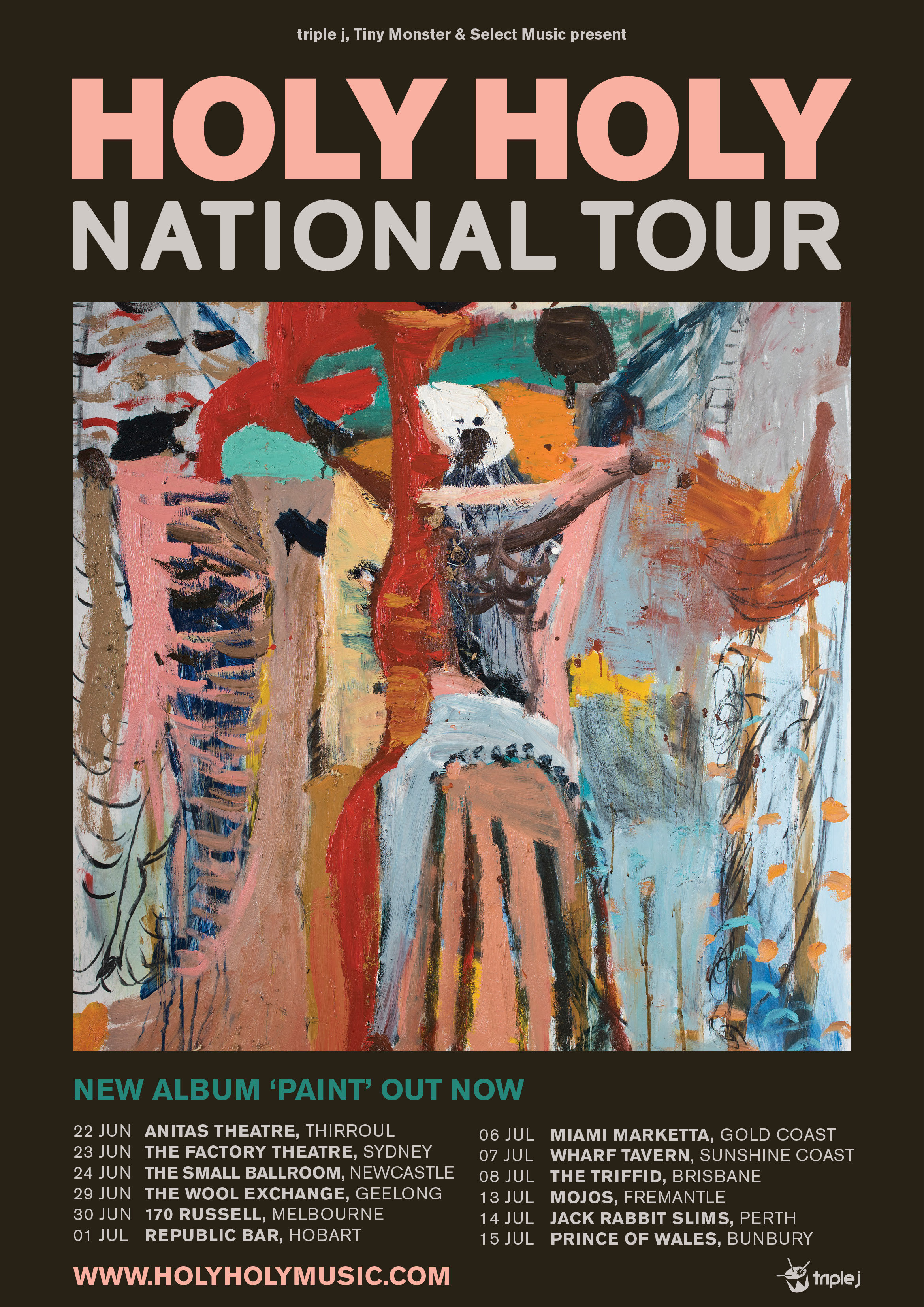