PRAISE FROM THE UK PRESS

“‘Technology’ is engaging, fun and an early contender for album of the year, plus the album of this band’s career” – 9/10
Rock Sound
“If album number three proves one thing, it’s that Don Broco are an incredibly original, inventive and exciting band” – 4/5
Kerrang!
“Their most ambitious album yet” – 4/5
The Sun
“Technology is without a doubt their best album to date” – 8/10
Drowned In Sound
“UK rock heroes return with a blinder… delivering truly infectious songs” – 4/5
Rhythm
“Duran Duran pop-funk, cranked-up guitars, Royal Blood riffola” – 3/5
The Guardian

Following the release of their Top 5 album Technology and sold out run of UK dates this month, Don Broco have announced a brand new string of live shows for April and May.
Released to widespread critical acclaim earlier this month, Technology became the band’s second Top 10 album and first to break the Top 5. After selling out both their Alexandra Palace gig last year to over 10,000 fans and their current tour, the band have now announced they will return from their upcoming US tour to play an extra 9 dates, starting in Dublin on the 23rd April. 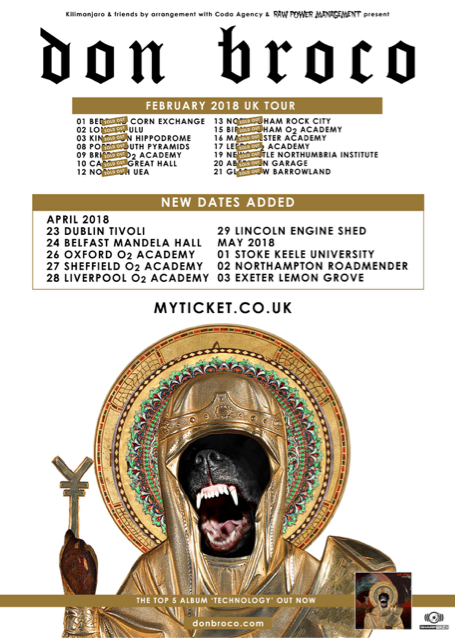 SKEGSS ANNOUNCE MY OWN MESS NATIONAL TOUR IN...

THE PARTAE & BULLSHIT Tee Now On The...