Out on new label Break Even Recordings

The track joins the band’s previous singles ‘Boogie Board Muck Around’ and ‘In Space Today’, the latter of which was added to rotation on FBi Radio, and saw airplay across community radio and triple j. Nice Biscuit is Ben Mulheran (guitar, keys, harp, vocals), Billie Star (vocals, guitar, percussion), Grace Cuell (vocals, guitar, percussion, keys), Jess Ferronato (guitar, vocals), Kurt Melvin (drums) and Nick Cavendish (bass). The band began after set of friends and acquaintances were invited to play a one-off performance at a party on a property, first meeting to rehearse in the Spring of 2016. That first show did more than exceed the expectations of mates, and the Nice Biscuit chimera was born.

Word spread of their live performance, a world of jams tinged with the colours of Krautrock, psychedelic surf garage and a pinch of pop. Matching handmade costumes join synchronised movements, and a hive-mind consciousness that spreads to the crowd – the Nice Biscuit live experience is immersive, visceral and never void of purpose. They have been invited to support acts such as The Growlers, Allah-Las, Jen Cloher, The Murlocs and Gabriella Cohen, and have enchanted the stages of Gizzfest, Blurst of Times, and the Oxford Arts Factory 10th Birthday Party. In 2017 they won triple j Unearthed’s competition to showcase at BIGSOUND, later named as one of their Top 10 bands of the conference. This March, the band will embark on an East Coast tour to launch ‘Captain’, including shows in Melbourne, Sydney, Gold Coast, Brisbane and an appearance at Tasmania’s PANAMA festival.

Nice Biscuit’s ‘Captain’ is out proudly on Break Even Recordings, newly launched as an imprint of independent heavyweight Inertia Music. Made up of four members of the Inertia family, Ryan Saar, Bree Wilkinson, George Gillies and Tom Grant, the label is an outlet for the exploration of diverse, interesting and inspirational sounds. Break Even Recordings will seek to contribute to the already vibrant and inspiring landscape in Australian independent music.

‘Captain’ by Nice Biscuit is out now on Break Even Recordings 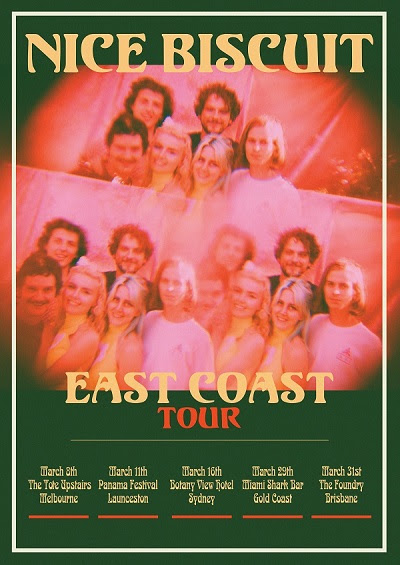